An Innovative Mixture of Water and Electricity

Electricity and water normally don’t mix. But an invention by two Northrop Grumman engineers eliminates that incompatibility and the obvious danger of exposing electrical currents to water by — believe it or not — creating a new kind of electrical connector that operates while exposed directly to water.

While the manufacturers of most electrical connectors take great pains to protect the electrical contacts in their connectors from water, the new invention embraces wetness — philosophically and practically. The contacts of this underwater electrical connector “grow” their own nanometers-thick insulation layer as a result of a chemical reaction with the water. This thin layer self-heals when scraped away locally during the mating process, re-insulating itself. The NiobiCon technology provides a connector that is so safe, you can touch the contacts while electrified underwater, and not receive a shock. It also provides a very high-reliability connection that can be mated thousands of times underwater.

“Other connectors try to fight the sea; ours works in harmony with it,” said Northrop Grumman Fellow Harvey Hack and Senior Staff Engineer Jim Windgassen, who merged their different backgrounds to create the new NiobiCon underwater technology.

Their invention initially aimed to improve the battery charging and data exchange process of unmanned underwater systems. The technology also has the potential to revolutionize other elements of both underwater technology, including submerged sensor networks, and above-water equipment that can be exposed to corrosive materials, such as agricultural machinery.

An Invention That Begs to Get Wet

Windgassen was pursuing a related but different approach to solving the unreliability of underwater connectors when he discovered that Hack was attempting to improve underwater corrosion resistance of connector contacts by experimenting with niobium, a metal with a corrosion resistance similar to titanium. Windgassen’s thoughts turned to tantalum, which is a similar metal often used in capacitors where the thin film is used as the dielectric, or insulator. Knowing how thin the film was in tantalum capacitors, he had a theory that such a film should be relatively easy to disrupt and achieve metal to metal contact. He asked Hack for some leftover niobium, and the two went to work making a crude prototype connector. Upon testing the first prototype, Hack and Windgassen found that the concept worked surprisingly well.

During testing, they found that the thin film that formed provided an extremely good insulation film that blocked current flow into the water, but also allowed very reliable connections between the contacts when mated.

“Although that film is only a couple of molecules thick, the film prevents any current from leaving the contact and going into the water,” Hack said. “Even with applied voltages that would destroy traditional contact materials.”

When the other half of a connector mates with the niobium-covered half, the contacts scrape against each other, locally disrupting the insulating film. With the film removed, direct metal-to-metal contact allows electrical current to flow unimpeded. When two ends of the connector are pulled apart, the niobium film reforms on the exposed areas in milliseconds.

NiobiCon eliminates the need for seals, oil or moving parts. It’s not susceptible to corrosion, does not allow shorting of attached electronics, and it isn’t limited by water depth. NiobiCon can also mate and de-mate with the power on without any electricity entering the surrounding water, vastly improving the safety of this type of technology. Even with relatively high applied voltages, the film prevents a shock hazard from developing; the contacts can even be touched with wet fingers underwater without shock.

Many unmanned underwater systems run on batteries that have limited energy storage capacity, ultimately limiting the reach of their missions. An underwater vehicle that relies on NiobiCon technology extends the possibilities by allowing batteries to easily be recharged, or even replaced, while underwater. An automated underwater vehicle with improved battery life could conceivably explore deeper stretches of ocean, opening the door to new discoveries of organisms and allowing scientists to further study the deep sea for the effects of climate change.

NiobiCon could also improve the reliability of underwater observation sensors that have long experienced trouble because of shorting and corrosion of their electrical connectors.

But the technology’s promise doesn’t end underwater. Many technologies on land are also vulnerable to water. Agricultural chemical spray equipment, irrigation systems and other equipment exposed to water on a daily basis are obvious candidates. Historic flooding in the Midwest also highlights the need for corrosion-proof machinery, as a Successful Farming Magazine article notes. Equipping machines to run reliably when exposed to wet conditions, will certainly benefit farmers.

And as Windgassen noted, breweries could use a dry hand, too. The electrical components of water-filtration systems, storage tanks and other brewing equipment get wet, inviting the need for corrosion-proof and long-lasting underwater electrical connectors.

Sometimes, it pays to be all wet. Thanks to the ingenuity of Hack and Windgassen, electrical connections that operate in the wet could experience a paradigm shift that benefits science and businesses alike. 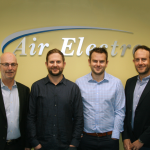 An Interview with Steve Strull, CEO and President of... Previous
Setting the Stage for Entertainment with Industrial Connectors Next 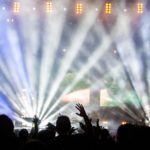